How to Test for Continuity with a Multimeter 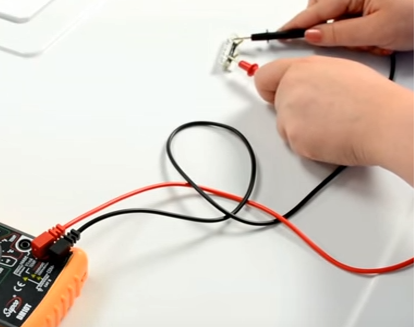 If you’re a first time homeowner, occasional DIYer, or just want to learn more about your appliances a great skill to have in your arsenal is being able to test parts for continuity.
Being able to test parts yourself can save you time, money, and even a few headaches.  Instead of buying parts and hoping they’re the right one or immediately calling for service, you can usually at least identify what the problem is.  You might still need to call a repair person for certain jobs, but much of the time you can order the part and swap it out yourself.
You might thinking to yourself, that all sounds well and good but what is continuity and why do I need to test for it?
When a part has continuity, it basically means that electricity can pass through it the way it normally should.  When a part doesn’t have continuity it becomes a roadblock, stopping the flow of electricity through the circuit and preventing the part from being able to do its job.
How to test parts:
Most of the time, all you’re going to need to test a part is a pair of safety gloves, a multimeter, and maybe a few basic tools like a screwdriver or nut driver to access the part.  All these things are relatively inexpensive and great to have in your toolbox anyways.
If you’ve never used your multimeter, you’ll have to set it up.  Plug the red lead into the ohms jack and the black lead into the common or neutral jack.  Then you’ll need to turn the dial to the Ohms quadrant.  If your meter is manual, most parts with a lower resistance can be tested using the 200 setting.  If you have an automatic unit you should be good to go!
1. Make sure that you completely disconnect the appliance by unplugging it and/or shutting of the breaker before you start &         check your owner’s manual for the suggested readings.
2. Remove the part from the circuit by disconnecting the wires to avoid any risk of shock or blowing the fuse in the multimeter
3. When testing your part, make sure to only handle the insulated portion of the leads.  Touch one lead to one terminal on the           part and the other to the opposite. If there are no terminals try to find a contact point (metal, wire ends, etc) on either side.
If the meter reads zero (0) or with certain models if it beeps while the leads are touched to the terminals, the part has good continuity and probably isn’t the problem.  If the reading is higher than recommended by the manufacturer or displays “OL” (Open Loop) that usually means there is an issue or an open circuit and that the part needs to be replaced.
Still need a multimeter? You can find them on our website along with the genuine manufacturer replacement parts you need.
Previous Post
Next Post
My account
Information
Browse By Category
Quick View